Never before have I enjoyed FM so much as I do now. The urge to restart the game when losing is pretty much gone and during the entire season I only restarted once… and yes, I’m ashamed I did. It was due a game against Wigan and they went and killed my players. Five injuries, all of them between 3 to 8 months and I finished the game with only 8 players on the field. It did hurt quite a lot 😛 But ah well, I’ll take that single quit/load and remember it with shame to stop me from doing it ever again.

Anyway, here’s how the season ended. 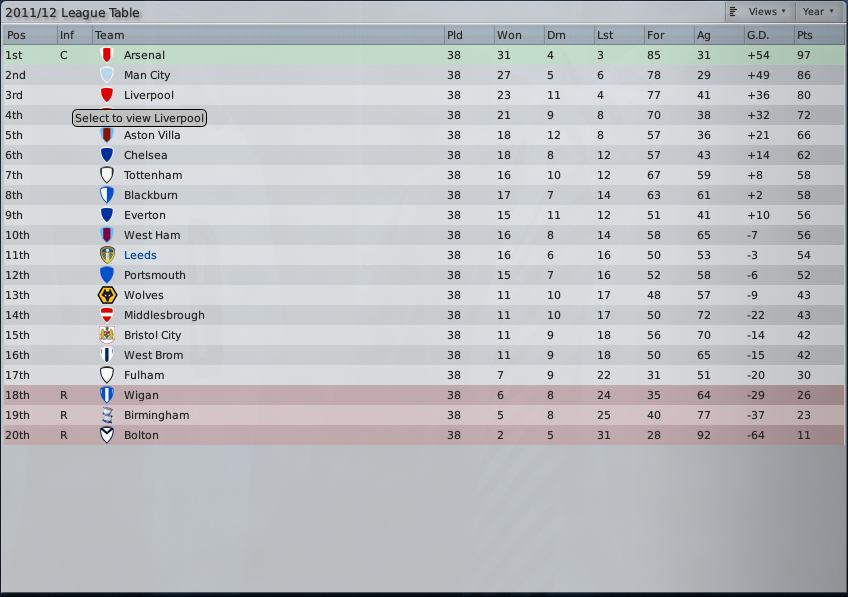 A fantastic spring boosted us up from 19th to 11th spot, specially with the last 5 games. At a moment we were up to 10th place but West Ham won over manu with 3-2 and they could keep their 10th spot. Still, an 11th place is fantastic and the board and fans were more than happy. Evenso, financially we had a great year and I got 4 million quid extra for transferfunds in march (bought some great youths and a leftback) and later on I got 11.5 million for silly season, which is a HUGE increase from last season. The bad part is that our sponsordeal is only 250k a year 🙁

This is the best eleven for season four: (stats here are for all games, the stats below in the text are for the premier league only) 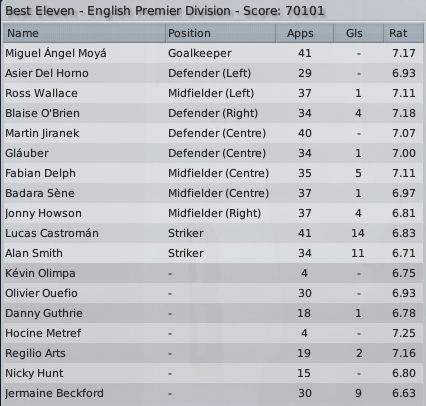 Moyá: A goalie that my ass.mgr found and boy is he great! Came as a Bosman deal from Mallorca and now everyone wants him. He has saved the team SO many times! And also got MOM 10 times which is a club record.
Asier Del Horno: He’s decent enough but my left defender spot will always be weak, so it seems. Season Stats: 25 app, 2 ass
Ross Wallace: Oh Boy! is this guy good! He came as Bosman from Sunderland and totally owned in the Championship.  42 apperances, 6 goals and 13 assist. Since we missed promotion that year we had to stick there for another one and that season was even better. 40 apperances, 7 goals and 19 assist! But the game in Premier League requires far more and the last season was not as great. 33 apperances, 1 goal and 6 assist is still a good record and he still makes it to the starting eleven sometimes. Also playing for Scotland now.
Blaise O’Brien: Golden boy! He’s a must-buy for any smaller club as he becomes a bloody wall in the defence. Cost 28k to buy him and he’s worth 5.25 million now. He did want to leave the club during the summer but I promised him to do my best and win some titles and he decided to stay. Season stats: 29 app, 3 goals and 3 ass.
Martin Jiranek: I bought this defender cause he seemed ok but mostly cause he’s from Czech Rep. which one of my future-to-be-stars (that didnt really break through) was feeling homesick and wanted someone from his own country in the team. Thing is, he became a great asset to the club and played about every game last season 🙂 Season stats: 36 app, 2 assist
Gláuber: A giant in the defence, atleast in the Championship. He’s doing a bit too many misstakes in the Premier League and he’s on rotation now this season. Still, he played quite a lot last season but was one of the players I had to replace. Season stats: 28 app
Fabian Delph: The Leeds Prodigy. Our own Fabregas. Delph wasn’t good enough to start the early seasons but last season he was a main character in our comeback to the Premier League. He’s still one of my best players and the worth of 5.5 million. Season stats: 31 app, 4 goals, 4 ass.
Badara Sène: Great DMC. Also worth now 5.5 million and was bought in for the sum of 1.8million. One of my most expensive purchases but well worth the penny. He’s great in the defence and aswell as building up the offence. He could’ve been my playmaker if it wasnt for Delph  and Ouefio which will become my future playmaker. Season stats: 31 app, 1 goal, 6 ass.
Jonny Howson: Leeds Prodigy nr2. Also worth 5.5 million now but it feels a bit overrated. He’s not really going to improve much more and it feels like this could be his last season in Leeds, if he doesn’t really improve now (I’m in november now). Season stats: 34 app, 4 goals, 4 ass.
Lucas Castromán: 32 years old now and not capable to be in the starting eleven (due my new sweeeet awesome striker pair, but I’ll come to that another time) but still a solid player. Without him I would’ve been stuck in the championship for ever. He came in for 500k and did 44 apperances, scoring 25 times(!) and 14 assist and being MOM 9 times under our Championship spell. Last season was more than ok for Lucas. 35 apperances, 12 goals, 3 ass and picking MOM 3 times.
Alan ”Leeds” Smith: I’m a sucker for Alan Smith. He’s one of the reasons that I loved Leeds so much in the early 2000. Then he left, broke everyones heart but has still shown how much he loves the club (IRL that is). The determination of Smith and the passion for football that he has is just admirable, so I just had to buy him back and he delivered! I was in luck because the year we got up, Newcastle got relegated and were in financial debt. I could buy of Smith for the amount of 0 quid 🙂 Season stats: 33 app, 10 goals, 6 ass and one MOM.

Subs:
Kévin Olimpa: Great goalie in the Championshio, not good enough in the PL. (Although Chelsea bought him this season, but on the other hand, Chelsea really suck this season hehe)
Danny Guthrie: Came in for 0 from Newcatle together with Smith but never really showed his potential. Sold him back to Toons (they bounced back at once) for 5.5 million 😉
Hocine Metref: Was ok in the Championship but way to whiney, asking for a starting position when he never was good enough. He got high ratings the four games he got on and therefor got into the best eleven. It should really ask for atleast 10 games played to make it to that list IMO.
Regilio Arts: Came in for 500k and worth 5 million now. Great defender! Sloopy as a youth but a hardworker now!
Nicky Hunt: Came in to be our blessing as right defender but he was misserable as a defender. I kept considing from the right side and it was all pretty much his fault. Awful player and I’ll never play him again. Sold him for 2.2 million to ’Boro (and they are doing GREAT now…. so maybe I missed something there hehe)
Jermaine Beckford: Started the season great with 7 goals in as many games. Then totally stopped and became useless.  He scored 29 goals in the championship which is more than great! but he truly is a championship player and doesn’t belong at all in the Premier League. Sold him for 100k.

Highlight of the season:

I was hoping that Ouefio would bloom out and become as good as he is supposed to be, but that didn’t really happen. Instead, the highlight of the season was between 22nd and the 26th of february. The 22nd we had a home game against Manchester United and the 26th a home game against Chelsea. Those two games were massive! Against Manu, we played really well but their defence is massive (as always) but we kept pushing and never really played a defensive style, which I guess is what they were expecting. Then in the 89th minute, Howson comes free on the right side, crosses the ball to Smith but Vidic reaches it first and bags it into his own net! 1-0 and three points in the bag! Funny thing is that Vidic was still MOM 🙂 Then Chelsea came and I was hoping for atleast a draw. Howson was on fire this week (players that understand the rivalty between teams are ALWAYS good to play) and scored twice on them! We had a 2-0 lead in the first half. in the 50th minute, Lucas scores 3-0 and I was in heaven! Then Howson had the missfortune to score an own goal (it deflected off from him) but Alan Smith ended the game with 4-1 and the fans were in seventh heaven. That was without a doubt the best part of the season. But after those two games we had Birmingham away and lost 2-3. A Birmingham that was on the 19th spot and totally cut off from safezone 😛

This is how season four ended for me. Our goal this season is to achieve european game. If we dont reach that stage, I’m afraid my wonderboys will end up leaving Leeds 🙁